Well I finally made it over to the Lake michigan tributaries!  First trip was two weekends ago and my dad an I ended up meeting a few guys (Blake, Neal, and Paul)  over in Milwaukee.  The kings were in real thick we all caught fish.  Neal actually got a nice little steelhead too!  A little better report of the weekend can be found over on the Illinois Wisconsin blog.  I'm having trouble downloading pictures from the weekend, but Blake has a few.

This past weekend (10/16) I met up with Neal and Blake in Sheboygan on the Sheboygan River.  There wasn't quite as much of a crowd compared to milwaukee, but there was no shortage of fish!  The coho's were in and a few late run kings were in as well.  I ended up catching 3 fair hooked coho's, my first three on a fly rod!

Check out this Forum!

Blake from over at the Illinois Wisconsin Fishing Blog actually started a forum!  So far it's just getting started, but it's already got some great information on anything fishing in wisconsin or illinois. 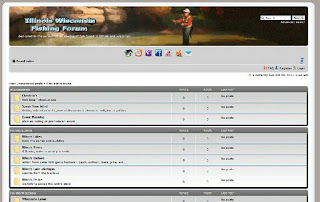 Check it out and sign up!  It's only going to get better!
http://www.illinoiswisconsinfishing.com/forum/index.php
Posted by Blake Frautschi at 10:15 PM No comments:

After a long, successful summer of trout fishing, I had to get out one last time before it closed. It was nice and sunny so I hopped in my car and headed out to Black Earth Creek, since it's so close to home. In the short drive out i experienced bluebird skies, complete downpours, a rainbow, and then a light mist for the rest of the day, with some rain showers mixed in. Keep in mind this was just a 15 minute drive, and i only fished for about an hour and a half! Fishing was slow, and i threw everything i had at them. Eventually i decided to put on a big, bass/northern streamer, about 4ish inches in length. I casted that around for quite a while and then rolled a nice fish, probably about 18 inches. I switched to a small black wooly bugger and casted to where the fish missed my streamer. I had about given up when i saw a rise. I casted towards where the fish rose, but was about 5 feet short. I started to strip in the bugger, and had a hard hit! I set the hook and a nice fish shot out of the water. After about a minute, and 4 more big jumps a nice brown came to hand. I thought it was a rainbow based on how it was fighting, but a fat 16 inch brown is nothing to complain about. A great way to end the season, now hopefully i can get out to the tribs pretty soon! 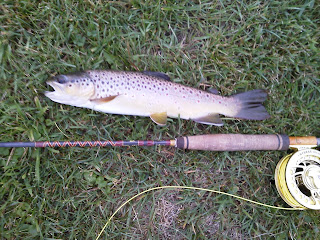