Well about a week ago i fished with my friend Damien and we ended up with a few pretty nice browns, and at our last stop, I ended up catching a roughly 20 inch northern pike!  This was the first time i had ever caught a pike in a trout stream.  We were fishing pretty far downstream so it wasn't that unusual i don't think, considering i have caught bluegills and a small largemouth bass just a bit farther downstream.
Fast forward to yesterday the 27th.  I was fishing a new stream out near lacrosse and caught probably over 70 trout from 11am-3pm.  About 60% were browns, and 39% were brookies, 1% northern pike.  This time i wasn't fishing a low stretch of the creek at all, and in the same hole i caught the tiny northern pike out of i also caught around 10 brookies and 5 browns.  I imagine that pike will be quite a bit bigger in a few years!
A few pools upstream i had a brookie, about 8 inches on, and had a GIANT brown come up and try to eat the brookie.  I would guess the brown at ~24" I fished the pool for a good 45 minutes throwing every kind of streamer i had in the box, including big nasty articulated leeches (did i mention i was using a 1 wt. that day?) 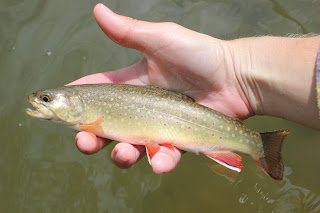 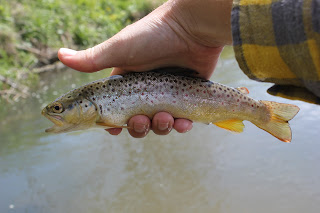 I also threw together a little video from last weeks fishing.   I haven't done much filming so far this season, but i figured i'd throw something out.  Didn't spend a whole lot of time one it, but let me know what you think!

Headed out night fishing tonight, and scored again!  I've been out past dark twice now, first time ended up with a nice brown around 15ish, this time I caught two browns!  First one was, once again 18.5" and FAT!  The second was right around 15" again, but while attempting to get the picture he slipped out of my hands and back into the drink.

Other than the night bite, fishing today was really tough overall, they just didn't seem very agressive all day. But with the past two days i can't complain! 2 fish of 18.5" in 2 days,  I don't mind this trend at all!
Posted by Blake Frautschi at 12:07 AM 5 comments:

Today i fished in dane county for a while and ended up catching around 10 fish, including my first inland wisconsin trout with a big old kype.  He was only 18.5 inches, but had a real nice hook jaw.  I also threw a mouse for a little while near dark and had a fish right around 18-20 inches come all the way out of the water on the strike!  Unfortunately he threw the hook about 20 seconds into the fight.  Next time i'll get him!

Also i caught my first two fish on a mouse about 5 days ago, i dont have pictures of them, but they were about 10 inches each... They loved the mouse on that stream, i had like 15 strikes, but only landed those two little guys. 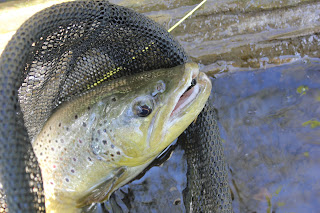 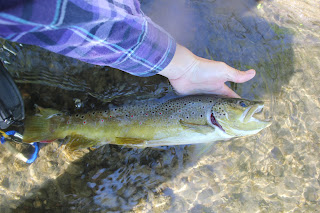 I've been fishing quite a bit lately, including monday, tuesday and wednesday of this week.  Monday was windy, but it paid off fighting the wind!  I ended up with THE strongest 19inch brown trout i've ever caught.   Tuesday I ended up with a nice 16 inch brown, that had some really, really weird fins (was he a stocker?) and yesterday i caught a 16-17 inch brown (he wouldn't hold still for a proper measurement)


Overall the bite has been a little slow though, not bad, but not really good either.
Posted by Blake Frautschi at 5:24 PM 2 comments:

Just picked up my two mounts from the taxidermist yesterday and snapped a couple of picture.
I got them done at Frye's taxidermy in Middleton, Wi.  I think he did a good job with both of them, and he does them for a good price.  He's done 3 shoulder mounts for us and all of them have turned out great.


The 2011 season was a GREAT one for me, not a bad season before i head off to college.